So as it turns out, I should’ve looked into this anime a little more. I’d never heard of this anime before, so I was just watching it on a whim. Turns out this is actually a reboot of an OVA series called Nurse Witch Komugi. I was annoyed and ready to scrap the idea of this article and watch something else, but you know what? Screw it. I watched this damn thing so I’m gonna talk about it. Screw the arbitrary rules I set for myself about watch the first thing in a franchise. Hell, this is a reboot anyway, I can cheat if I want.

So anyway, Nurse Witch Komugi R follows Komugi Yoshida, a middle schooler and budding, albeit obscure, Idol performer. She dreams of one day performing at the Tokyo Dome. Good for her I guess. Anyway, between school and being an Idol, she stumbles upon a little puffball thing that was being attacked by some cats or something called Usa-P. I swear, by the way, that this entire scene is a nod/satire of how Usagi meets Luna in Sailor Moon.

Usa-P decides to try and force being a “Legendary Girl” onto Komugi due to her act of kindness towards him, only managing to do so when she later encounters a cockroach later and agrees to do anything so long as he gets rid of it. So. Yeah. That easy. She becomes the magical….oh, sorry, “Legendary Girl” known as Tombo-E Girl and is tasked with collecting 108 Fan-C Cards.

So basically folks, this anime is a combo satire/homage of both Sailor Moon & Cardcaptor Sakura. At least in its most basic form. But I mean, when she “cleanses” the first monster she fights it turns into one of those “Fan-C” cards. So you know. Cardcaptor Sakura.

That all said the first episode was still enjoyable to watch. I laughed out loud quite a bit while watching this. But mainly because of all the nods or jokes they make about magical girl anime. For one thing, there’s a running gag where Usa-P keeps making a big deal out of how the outfit Komugi will have to wear is embarrassing, which puts off Komugi at first. Then when she actually transforms she actually finds the outfit to be extremely cute. Even though Usa-P still tries to claim it’s embarrassing.

Another funny moment is where Komugi can’t remember the “incantation” to spark her transformation sequence after Usa-P tells her. So Usa-P just writes it down on a piece of paper and gets her to read it out. So instead of the typical enthusiastic exclaiming of it even the first time it’s uttered, she says it fairly casually. I think Sailor Moon had a similar joke, but even then Usagi said it fairly enthusiastically when she got it right.

Komugi herself is a fairly enjoyable character. She could easily be very annoying, but at least for me her personality is fine. In fact, the fact she kinda just blunders her way through her first fight for the most part I found to be pretty entertaining. Hell, part of the sequence for her “special attack” of sorts has her trip and almost fall over. That attention to detail is pretty great. The banter between Komugi & Usa-P itself is pretty funny, and is well worth watching this anime for.

So yes, I will definitely be watching the rest of this show. And I definitely recommend this one to any fans of the magical girl genre. Nurse Witch Komugi R consists of 12 episodes, and is currently only available in Japanese with English subtitles. As stated earlier, this anime is actually a full reboot of an OVA series called Nurse Witch Komugi, which in itself is apparently a satire/parody of a more serious anime called The SoulTaker. The more you know I guess.

Note: There are spoilers for the first episode of the anime in question. You have been warned.

So, hey guys, been a few months, but here I am again! This time I’m trying something new. I decided I’d pick anime I’d never watched before, watch the first episode of it, and give my initial reactions/impressions on said episode. After I while I might expand this to include live-action shows and general cartoons, but for now I’ll stick to anime. Sound good? Cool. With that out of the way, let’s get on with it and talk about the first anime I’m gonna talk about.

What a name right? This anime was actually recommended to me by a fellow Australian when I asked for magical girl anime recommendations…..yes I like magical girl anime. Sue me. Anyway, out of nowhere one of the people suggested this particular anime, pointing out it was more of a “magical boy” anime instead, but if anything that made me more interested.

Now, it’s been about a year since then, and oddly enough this anime only started airing last year, but I finally got around to watching the first episode after restarting my AnimeLab subscription, and holy fuck. This anime is one of the funniest I’ve ever seen, and I’ve only seen the first episode. I’m honestly glad to find out the show is blatantly supposed to be a satirical take on the “magical girl” genre, because that’s exactly what it feels like.

As a summary, the anime is about five high school boys who end up being chosen by a pink, wombat-like alien (yes, you read that correctly) to be the defenders of Earth; fighting the forces of evil with the power of love. Not even kidding. “Wombat” (they keep calling him that since he looks like one) even refers to their transformations as them turning into “Battle Lovers”, their weapons are called “Love Rods” (insert dick joke here), they transform by kissing a damn bracelet he gave them…..I swear to God this anime is one of the most ridiculous things I’ve ever seen and I fucking love it. I don’t think I’ve laughed this hard watching an anime in quite a while. I even had fits of stifled laughter throughout their transformation sequences.

Hell their first enemy to fight is THIS thing!

I can’t make this shit up.

The first episode even ends with it being revealed that three characters we briefly see earlier are now being set up as the villains, collectively known as the “Earth Conquest Club”, and their animal mascot is a FUCKING GREEN HEDGEHOG-LIKE ALIEN WITH A DEEP VOICE!

(Not from the first episode to clarify but it’ll do)

I LITERALLY CANNOT MAKE THIS SHIT UP PEOPLE! I LOVE IT!

I mean holy hell. All this is being thrown at me in the FIRST EPISODE! I can’t imagine what the rest of the damn thing is like. But if it’s any more insane and ridiculous than this first episode was, then I’m definitely gonna enjoy the ride.

To wrap it up, I am DEFINITELY watching more of this anime. The first season is only twelve episodes long, but it is apparently in the middle of airing a second season right now, which I will definitely try to check out once it’s available on the service I use.

As far as a recommendation goes. Holy shit. If you have even a passing interest in magical girl anime, and would like to see a satirical take on the genre, this is worth a watch for just how blatantly ridiculous it is. I cannot recommend this highly enough. That said, I would like to note that this is currently only available in subbed form, so if you’re like me and prefer dubs, just keep that in mind before you give it a try.

And now if you’ll excuse me I’m gonna go and start writing up the next one of these. The focus of which will be the first episode of Kill La Kill.

Mario’s missing! Core and Gunny take to Peach’s castle where they run into a little problem. A little… rather annoying problem. 3… 2… 1… GO! And in case you missed yesterday’s premiere of Bulletoon Weekly’s voice casting, check it out, Here! 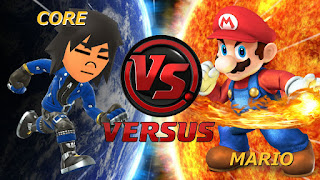 It’s the season finale! Coming off of his “victory” against the Lord of Evil, Core faces off against the hero of the Mushroom Kingdom. Will he prevail? 3… 2… 1… GO!

END_OF_DOCUMENT_TOKEN_TO_BE_REPLACED 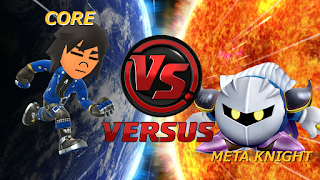 Meta Knight versus Core!
Is the fist mightier than the sword? We shall soon see as Core takes on Dreamland’s Dark Knight.

END_OF_DOCUMENT_TOKEN_TO_BE_REPLACED

Leap into the world of Super Smash Bros, joining a newbie in his quest to carve out a place for himself among Nintendo’s classic, time-tested pantheon of characters. 3… 2… 1… GO!

The family builds a snowman.

Billy and Jeffy watch some TV.

Billy and Jeffy play in the yard.

Billy and Dolly talk about how different things used to be.

Jeffy scratches his back.

Jeffy got a little roughed up.

Jeffy gets some drawing advice.

Billy has some advice for his father.

Jeffy doesn’t have a job.