Hey everyone, it’s time for another update. Hard to believe it’s been a month already…

Scripts for the entire season are mostly finished. I’ve gone through three rounds of writing/revising, so most of the elements are in place. I still need to figure out a few things, but that usually happens during the production process.

I’ve begun collecting sprites and backgrounds. I forgot to mention it before, but season 2 is going to be 100% animated! I’m going to try something new (for me, anyway) and film myself in front of a green screen doing all the poses I need, and drawing over them to make them look like video game sprites. This is a process called rotoscoping, and was used most famously in the original Prince of Persia game, the film Heavy Metal, and the music video Money For Nothing by Dire Straits.

And finally, each week I reveal a game that is not the game I’m using for the plot, but that I’m using portions of. This week’s game is Final Fight, as I’m using Metro City as the location.

See you next week!

Hey everyone, it’s time for the weekly update! Why am I doing these, you may be asking? There are three answers. 1) I want you to know that I’m working at this, and it’s a huge undertaking. I don’t know of many other internet producers who will start planning out their series half a year in advance, but I also don’t know of many other series like this one. 2) I need to keep myself motivated, and by letting you know what I’ve done in the past week, it shows that I am getting things accomplished. 3) To have a record of what I’ve done, to inform anyone else who may be havings problems trying to accomplish a similar goal. If you have a question, please feel free to ask it and I’ll do my best to answer you.

Over the past few weeks I’ve had several ideas about what I wanted to do with season 2 of Adver-tainment. As many of you know by now, I’m not a person who is interested in doing the same thing over and over (except for maybe the phone gag from season 1), so I’ve been thinking about the direction I want to go. I’ve had enough good ideas to have the initial plan splinter off into two very separate plans. The original idea for season 2 has been put on the back burner, and may potentially be re-visited in another year or two as season 3. I did download over 300 TV commercials, it would be a shame not to use them. Without giving away too much yet, the plan I’m going with now is to pay homage/do a parody of a video game. I’m not going to reveal which game it is yet, but I can say that I’m pulling elements from a LOT of other games to flesh out the story. If season 1 was my love letter to print ads, season 2 will be my love letter to the NES.

As far as I can tell, there are going to be at least eight episodes in season 2, possibly nine. I had previously mentioned there being seven, but that was going with the original plan I had initially set up (to do a total of 20 episodes, and call it a day). I’ve been working hard to get the scripts written, and should have them completed in another week or two. One thing that’s been helping greatly is that I have the support and assistance of the ThatRuled family, which makes joke writing a lot easier. You’re probably going to see/hear a lot of them in this season as well, I’m not going to be throwing roles into the ether and allowing whatever random person on the internet wants to voice them this time. You’re going to hear a lot of my co-hosts from The Isometric Perspective, Grant Beard and JimmyTR (the latter of whom I’ll reveal is going to be playing the role of Nick Fury), as well as my good friend and phenomenal voice actor, Colin Bent. He did the voices for Cap’n Crunch, Mike Haggar, and Dracula in season 1 (as well as several other minor roles), and I’m super excited to be bringing him along for season 2.

Sorry if this update came across as a little cryptic, but I hope you understand that I don’t want to just tell you everything and spoil the surprises I have in store. Check back here next Friday for the next update! There’s a lot of news, stories, and (hopefully) interesting tidbits in the weeks and months to come. Stay tuned!

*August 10th addition* – While I’m not going to reveal what game I’m basing season 2 on, in each update I’ll let you know about a game that I’m using portions of. This week’s game is The Punisher, expect to see a character from that game. Hey everyone, Skeletroy here to give you some updates as to what’s going on in the world of Adver-tainment. I have made the decision to go for a second season, but that’s going to take some time. So while I’m knee deep in pre-production I thought I’d share some things to pass the time a little quicker. The following pictures are (obviously) not yet completed, and may not be representative of the finished product.

As you can see in this first picture, I’m updating the lettering to give it a more stylized look. I’m going to do parodies of these ABC commercial bumpers; there will be one for each episode, so I’m going to make seven of them in total. 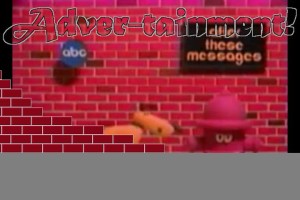 I know this isn’t a big update, but hopefully it’s enough to show you what I’m currently working on. Thanks for your patience and enthusiasm; season 2 of Adver-tainment begins in January!

*August 10th addition* – While I’m not going to reveal what game I’m basing season 2 on, in each update I’ll let you know about a game that I’m using portions of. This week’s is Super Mario Bros. You’re probably going to see some backgrounds and characters on the show.

Skeletroy gets framed for a crime he didn’t commit, and has to go on an adventure.

A storm is brewing…

Skeletroy rambles a bit about the making of Adver-tainment!

The conclusion to Skeletroy vs. Castlevania…I mean, Spider-Man vs. Dracula.

Skeletroy (and friends) read the first half of “Spider-Man vs. Dracula”.

Skeletroy looks at some cereal ads.

Skeletroy takes a look at some Sega ads, a comic starring Meat Loaf, and shows you how to draw Spider-Man.