Fun fact. This anime was released the year I turned seven. It turns 20 next year. That should give you a hint at my age if you weren’t already aware. In any case, I was well aware of the existence of this anime, but for whatever reason I’d just never given it a shot.

I literally was just scrolling through the anime on AnimeLab, came across it and thought “You know what? Why not. Let’s do this”. One last confession before I get going. I started to watch this dubbed. Then just….I wasn’t feeling it, so I switched to the Japanese version. Something tells me I made a good call.

I can’t really discern from the first episode what the entirety of the anime is about, so once again I’ll only really be able to talk about stuff that happens in this specific episode. Great. I know how to pick them don’t I? In any case, the episode revolves around a mysterious figure called “The Black Swordsman” (Guts is his real name and what I’ll call him from now on) calling out the ruler of a….kingdom? Village? Honestly it’s not explained very well. Also the guy he’s after looks like this.

“Yes, Snake Baron? Serpentor called. He wants his outfit back”.

And as if that wasn’t enough, the fucker decides to transform into this “cobra but with arms and legs” form. Which to be honest just looks kinda silly to me rather than scary or creepy.

You know…there’s a sex joke here, but this guy is such a masochist that I’m not even gonna go there. You’re welcome.

In an actual surprise Guts gets his arse handed to him for a while, only to pull a John Cena and fuck the Snake Baron guy up out of nowhere with his sword. Adding insult to injury by continuing to use his little wrist crossbow thing to hurt him more until he finally dies. It’s actually kinda brutal in a way. When they’re not showing Snake Baron guy’s face anyway.

Just…come on how am I supposed to take a guy with that face seriously? How?

Guts then picks up this random-yet-important thing Snake Baron guy had around his neck and thinks back to something that happened ages ago. Which apparently leads into the rest of the series being one big flashback, but I have no idea if that’s actually the case or not. Again, I really know nothing about this anime.Oh there’s also a scene about how Guts has this sort of curse or something which isn’t entirely explained. I mean it vaguely is but not really.

I must say this episode is a very……odd first episode. I’m more confused and just left with questions that most anime would’ve either explained or built to. But since this is going into flashback mode, I’m assuming it’ll be quite a while before I get any answers. Which I guess is fine. So long as this episode does actually make sense in retrospect at some point. It was fun to watch and everything but yeah. It’s just very “What’s that? Who’s that? Who are you? What is this?”.

Oh also the opening theme is terrible. Really terrible. Just throwing that out there. Anyway, will I continue to watch Berserk? Well, despite this first episode confusing the hell out of me, yes. I do want to keep watching. If out of morbid curiosity than anything else.

For those interested, Berserk consists of 25 episodes which are available in both dubbed and subbed formats. There’s also a trilogy of Berserk movies called “Berserk: The Golden Age Arc” and a new adaptation of the Berserk manga is currently running, having aired a first season already, which consists of 12 episodes. The new adaptation also ties into the movies, just to clarify.

You know? I never intended to watch this anime. Ever. I had some idea of what to expect, and it didn’t really interest me much because of that. However, this was suggested and therefore was added to my list. I had actually intended to do Tokyo Ghoul as the other “Halloween special” article, but as AnimeLab finally made it available for streaming, I decided to watch it instead. So yes. This is an anime I at least had an idea of what to expect. Been a while since I’ve covered one like that, hasn’t it?

I must admit, the spoilers in this are gonna be pretty heavy. So you better hope you listened to the spoiler warning earlier. I can’t really avoid spoilers or there won’t be much to talk about. We good? Okay then.

The first…..I don’t know….10-15 minutes or so are basically Lucy’s escape. It’s fairly explicitly gory. Like I’m not even kidding here. There’s more blood in Elfen Lied’s first few minutes than most shows have in their entire run. Calling it a bloodbath would be pretty appropriate. It’s pretty intense, with only like, one brief break from the death count to show a conversation between some female characters, because one of them dies later. So I guess at least it…paid off somehow?

Now, I’m not gonna show many if any actual screenshots from the rampage, or the episode in general, mainly for one reason. For the vast majory of the episode, Lucy is naked. Like full on naked. In particular she’s also naked for the entirety of this opening rampage. 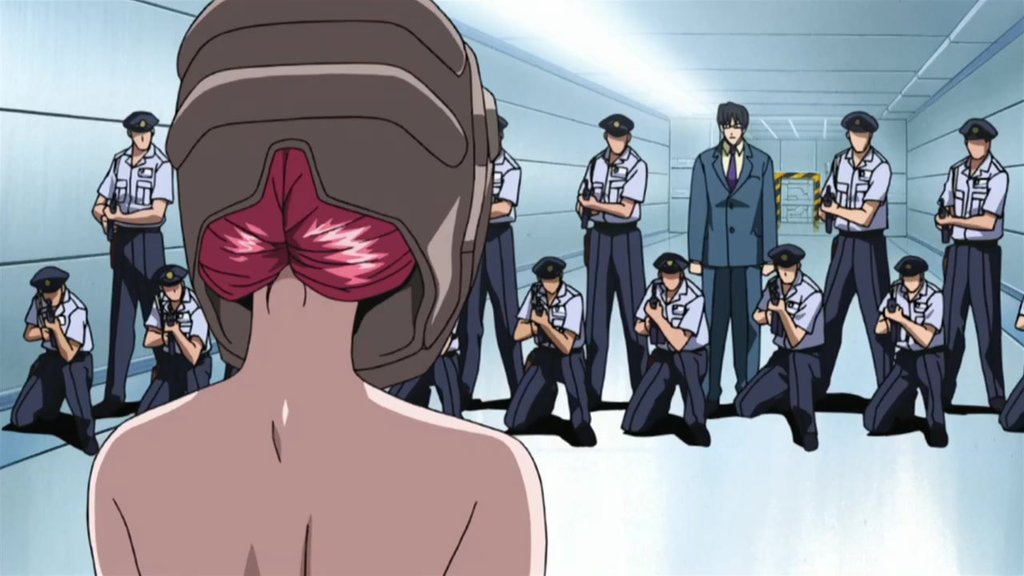 This screenshot is safe enough so I’ll show it at least. Partly to help explain what I mean when I say the rampage is a bloodbath. See the men in that image? At least eight of them survive out of about 16-18 that are there. And that’s mainly because Lucy just can’t be bothered to kill the rest. She is mainly just trying to leave after all. And she does have psychic powers. If she wanted to kill them it wouldn’t take much effort.

As if it weren’t obvious, she escapes. Though she also gets shot in the head with an anti-tank rifle. All it really does though it make the helmet thing they had on her come off and knock her out (though she does end up bleeding). Later she washes up on a beach and is discovered by Kouta and Yuka, two cousins who just happened to be on the beach. Unlike most “discovering people on the beach” this is more them noticing her and reacting, rather than her still being unconscious and them waking her up.

One other thing that happened due to Lucy being shot in the head though, is that Lucy reverted to a very child-like persona incapable of normal speech, only being capable (at least for now) to say “Nyu”, which Kouta and Yuka decide to refer to her as. Later there’s a misunderstanding and Kouta yells at “Nyu”, making her run off back to the beach. Meanwhile the organisation who’d been containing Lucy (or had created her or something, I have no idea) deploy a Special Assault Team to kill Lucy, rather than capture her, considering the threat she poses.

One member of this team is Bando. Bando is a complete fucking arsehole. He’s also pretty homicidal. Totally enjoying the fact he’s finally being given orders to actually kill someone. When I say he’s an arsehole though, they make this point pretty clear. A woman comes up to offer him some coffee or tea, and he smacks her down very hard, telling her off for “standing behind him” or something to that effect.

That’s about it as far as what happens goes (the episode ends with Lucy/Nyu on the beach again). Now, what are my thoughts on it? Holy shit where to begin, right? The gore is pretty intense, so if you’re squeamish this is not the anime for you. At all. If you hate nudity in anime? Then pretty much this entire first episode is gonna bother you. Considering I thought Lucy was supposed to be underage, the nudity bothered me a lot. Though really it was kind of distracting anyway, so even though she is supposed to be 18 it still kinda bugged me. Especially when she becomes “Nyu” and is supposed to basically have the mind of a toddler.

I mean I’m not even kidding about this. The opening credits, the episode itself and ending credits all have more bare breasts than most sexual fan service anime have. That’s quite an accomplishment. Though I will give the anime this much. At least the nudity in the episode itself is at least just kind of there, rather than necessarily supposed to be a sexual thing. At least in episode one. Either way it still kinda bugged me, but yeah, that’s just my stance.

Wow. I had a lot to say on this first episode with really trying, didn’t I? Well, I’ll just leave it there then. So, will I continue to watch Elfen Lied? Well, honestly probably, yes. But I must admit, it will probably be low on my priority list. I mean it’s not bad at all, but I’m not as morbidly curious to continue as I thought I’d be. I’ll try to watch more, but I’ll take my time. For those interested, Elfen Lied consists of 13 episodes and a tie-in OVA, all of which are available in both subbed and dubbed formats. However when I watched it on AnimeLab I had to watch it subbed because I guess they hadn’t put the dubbed version up yet? Not sure why.